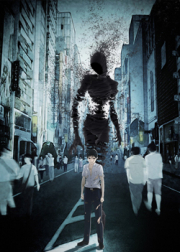 Those who are resistant to death are called "Demi-humans". That day, Kei Nagai, a High school student, should have died in a traffic accident, but he comes back to life shortly after. In other words, Kei is a demi-human. Since then, Kei's world changes dramatically. Terrified and without knowing what is going on, Kei is saved by his friend, Kai. Together, they flee deep into a deserted mountain. Later, a group of demi-humans who are hostile against humans contact Kai… Who is he fighting against? Who should he side with?
Read manga in spanish
Read manga in french
Chapters
Top genres
romance 1591comedy 1438shounen 1097shoujo 1095action 1089school life 943drama 940seinen 784fantasy 781supernatural 752adventure 485slice of life 471sci-fi 341mystery 336historical 250horror 211josei 182psychological 173sports 143tragedy 138